A national park adjacent to the Imperial Palace in Chiyoda Ward, this park is located between Kudan and the Imperial Palace, and has the Nippon Budokan on its grounds. In the 1950s, when many buildings such as the former Konoe Regiment were dispersed and the area was developed as a forest park, cherry trees were planted, and now there are approximately 300 cherry trees, mainly Someiyoshino.

The park along the 2.5 km-long causeway that runs from JR Iidabashi Station to the Yotsuya Station area in Chiyoda Ward is the Outer Moat Park, a remnant of the outer moat of Edo Castle. Large Someiyoshino cherry trees line the moat. The area around Yotsuya Station is ideal for cherry blossom viewing, as it is on the bank and has a space more than 5 meters wide.

Hibiya Park was Japan’s first Western-style modern park, and celebrated its 100th anniversary in 2003. As it is called an oasis in the business district, the park has many fountains, including the “Grand Fountain,” the largest symbol of Hibiya Park, which provides a place of relaxation for people taking a rest nearby.

This is a small park located on the other side of the street in front of the Bank of Japan’s main office on Tokiwa-bashi Bridge between Otemachi, Chiyoda-ku, and Nihonbashi Hongokucho, Chuo-ku, Tokyo. The ruins of the Tokiwanbashi Gate, which served as the main entrance to Edo Castle, are protected as a historic site under the Law for the Protection of Cultural Properties, and a bronze statue of Eiichi Shibusawa, who devoted himself to this purpose, stands in this park.

East Gardens of the Imperial Palace

The East Gardens of the Imperial Palace are a 21-hectare garden centered on the Honmaru and Ninomaru areas of the former Edo Castle, located on the east side of the Imperial Palace in Chiyoda Ward. The East Gardens form a major cherry blossom planting area in the heart of the city, with a variety of cherry trees blooming in a spacious area within the grounds where many historic buildings are located.

This park was created along the moat on the west side of the Imperial Palace in Chiyoda-ku, and is also called Hanzomon Park because of its proximity to Hanzomon Gate. Approximately 170 cherry trees, including Someiyoshino and Yamazakura, are planted here, and visitors can enjoy the beauty of the pink cherry blossoms that contrast favorably with the deep green surface of the Hanzo moat and Chidorigafuchi.

This park is built along the moat on the west side of the Imperial Palace in Chiyoda-ku, and is also called Hanzomon Park because of its proximity to Hanzomon Gate. About 170 cherry trees, including Someiyoshino and Yamazakura, are planted here, and you can enjoy the beauty of pink cherry blossoms that contrast favorably with the deep green surface of the Hanzo moat and Chidorigafuchi. 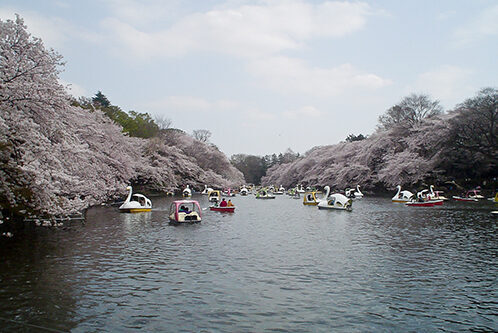 Inokashira Park was the first suburban park in Japan and was established in Musashino City, Tokyo in… The cherry trees along the 8-km-long Meguro River, which runs from Setagaya-ku, Tokyo to Meguro-ku, Shinagawa-ku, and… 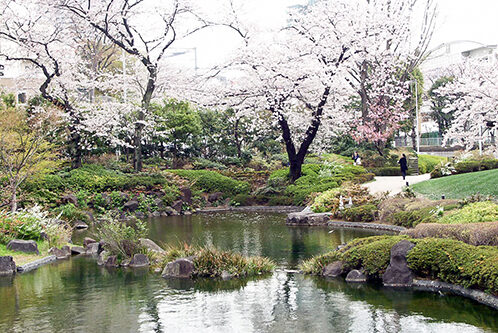 Opened in 2003 in Roppongi, Minato-ku, Roppongi Hills was at the time the largest-scale urban redevelopment project… Sumida Park, which is always one of the most popular places for cherry blossom viewing in Tokyo,…